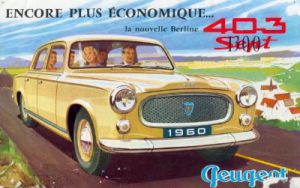 I like making my own tee shirts. I even have my very own tee shirt shop. I make a new shirt about every ten years or so, big business. Currently I have a back log of 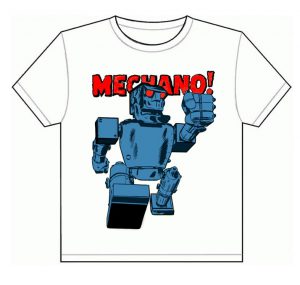 2. Gossamer the Monster in a can. 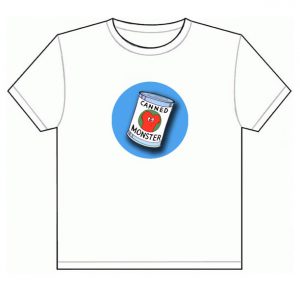 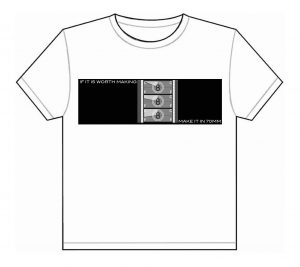 4. And the elusive Jesus Shirt (long story, another post perhaps) 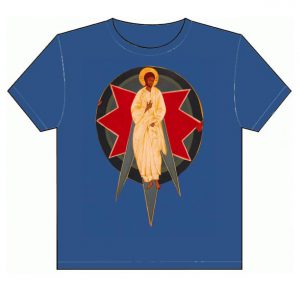 But the one shirt I currently put into production may be the most important to me. It is a graphic devoted to my favorite automobile in the world, the Peugeot 403.

As far as I know, it was the only car my father ever owned. He drove two during my life, and I remember them both vividly. Many hours were spent in the back and front seat of that ride, the smell of the straw filled seats, the little pointer ends that emerged from those seats and pricked you. The rear center retractable divider that was the LAST WORD when my sister and I were fighting in the car. the stains on the headliner, the hand crank windows that needed a little extra oomph to get going. It is all a part of my permanent automotive consciousness. 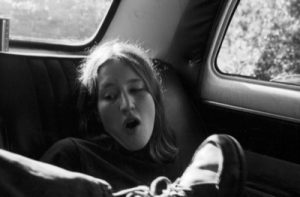 My sister in the back seat

I learned to drive in this car, “three on the tree” no less! Along the road where it spent the last decade of it dormancy in East Hampton, NY. 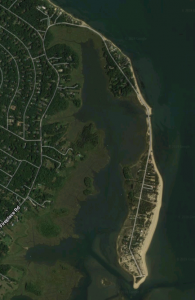 Springs Fireplace Road. It is a road that leads to a cul de sac with a spit of beach at it’s end. It was the early 70’s, there was virtually no traffic. I must have been no older than 11 years. I sat in that car for hours training, pretending to shift gears, working the floor pedals like my dad had shown me, adjusting the mirrors, getting everything ready for my first attempts at driving. First it was just up and down the driveway, which might be about 25 feet, yet felt like speedway. Finally out onto the open road, the slow process of getting past first gear. (I thought I would never get the hang of clutching), getting to the first turn where the road forked and then handing it over to my dad because that was as far as I could go. Then I remember going all the way, three gears and all. It felt magical and fast and wonderful it was all happening inside of a Edward Hopper painting. One thing is for sure, my dad was a good teacher. 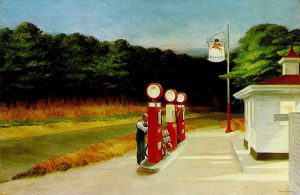 I also have this strange and mangled memory of my dad leaving his first 403 parked on the street in Brooklyn Heights for the last time. I guess he was done with it and it was cheaper to just let it sit there until something or someone disposed of it. I remember walking by it hundreds of times over the months (years) and wondering what would ever happen to it. Then one day I was walking by it and I saw it being hooked up to some type of hauling machine, but here is where it gets weird. What I remember seeing is that a cable was drawn over the top of the car and connected to the back and then a winch proceeded to draw the car in, basically folding it in half the long way like a bow tie pasta. It is such a real memory, but I have to admit it sounds unlikely. I imagine what I saw was just a car being towed, but what I thought I saw was my beloved 403 sliced in half.

There was a brief period where there was no 403, I don’t imagine that they fall off trees, especially in the later 70’s. But of course my dad found another one, almost exactly like the first. This is the car that I learned to drive on, this is the car the I held onto and this is the car I will some day see again.

At some point my dad acquired a VW Dasher (diesel) and the 403 went from being the “beach” car to just being an over sized rust bucket white elephant destined to live its last days in a darkened, mildewed garage out there in in East Hampton. I had always said that I would keep that car if it was within my power and when my step mom called me to say it was now or never, I firmly stepped up to the plate. 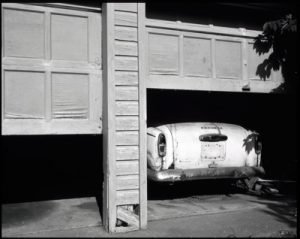 The last glimpse of my car

It was the early days of the internet and I remember doing text searches for antique Peugeot restoration places on the East Coast. I found one in Connecticut, but after speaking with them on the phone I just did not get a good feeling. I then stumbled onto a guy named Mike Aube, cloistered in the far off reaches of Quebec. 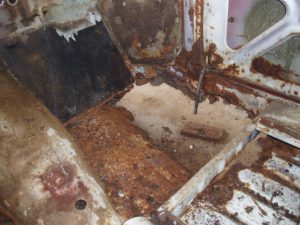 It was the first phone call with Mike that convinced me he was the man to take my dad’s 403 into the 21st (or) 22nd century. His quiet, reserved delivery, the long awkward silences on the phone and of course his clear love of the body type. As far as I know all Mike does is restore 403’s, I cannot swear to it, but at least that is what I want to believe.

So, we made a deal, part one of which was Mike driving down from Quebec with a flat bead trailer and picked up the long dormant jalopy. He stated it was convenient time to call because he had to drop off a vehicle somewhere in Pennsylvania, thus our pact was made. That was in October of 2001. This car had no been sitting without a whisper for years and when I spoke to Mike after he got back he was like, “Oh yeah, I had that up and running n about 15 minutes, turned right over. Great shape you know, only 30,000 miles on it!” My heart sang, it was true. The long lost Peugeot was destined to live again.

Shortly after the pick up Mike called me to authorize an eBay purchase for some parts he really needed for my 403. I said sure and after that I felt fully invested. You see Mike and I did not really figure on a solid number, you gotta let an artist have a little freedom. 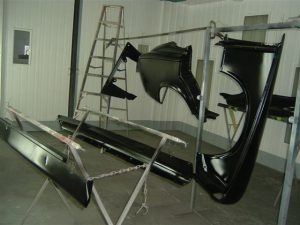 All I know is that someday I will have my father’s last car, the 403 traipsed across the continent from Quebec to California, stored somewhere where the gremlins cannot touch it, and when the time comes, teach my son to drive in it. 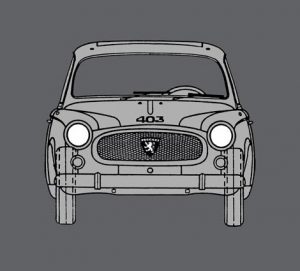 But until then, I am making this tee shirt. They cost $22 shipped and you can purchase one right now! I emailed a Peugeot Fan Club in France and immediately got this response:

We sure could be interested in such a T-Shirt.
Have you already some pictures to show?
We, Club 403, have done 18 T-Shirt, by 100 each, about our beloved car.
Best regards, we are waiting for more.

I was really happy to see the other day a great clip on TED from a guy that runs a camp for small children to do the five dangerous things that society no longer really likes allowing children to do. 1. Play with fire, 2. Own a pocket knife, 3. Throw a spear, 4. De-construct appliances, and 5. Drive a car.

The tee shirt is done! Came out great and very limited supply. If you want one just check out my tee shirt shop! 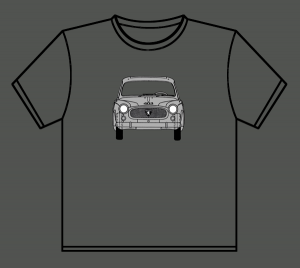 Just wanted to update the fact that after ten years of complete non-operation, I have finally started the ball rolling on the full restoration of my 403.  As December, 2009 this is what it looks like: 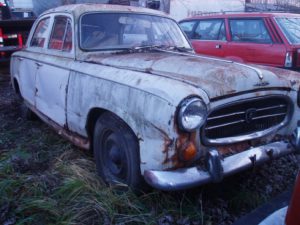 Keep a close watch here for the transformation to its new inner beauty. Will it take one, two, five, ten or more years? Only close watchers will ever know.

Hard for me to write this, but push came to a shove and the kind, patient person who has been holding and slowly resurrecting the beloved 403 finally gave me and ultimatum. Either pony up all the cash, or I gotta move on. I conferred with my loved ones and it seemed at this pointing time the best thing to do was cut and run. So, I parted ways with my Dad’s last car, but for me, lets just say the story is not over yet!

Who me? Well, Uh, I used to have a website (still do) that I love(d) and always wanted it to be pretty much a blog, even though blogs did not exist when I started the site. Like a daily newspaper of all things Hank is the way I always looked at it. So now, I crumbled and have a blog like the rest of humanity.
View all posts by admin →
This entry was posted in My life. Bookmark the permalink.