I’m also an inventor.
I’ve been an inventor since grammar school when I made a book called the Henry Clines’ Book (sic). The book is filled with detailed drawings of cars and ships and the usual things that ten year old boys like to draw, but there are also a number of DIY machines. Detailed schematics of many fabulous inventions such as the following. (click thumbnail for better view) 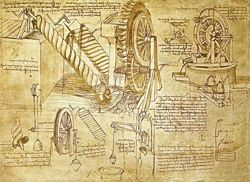 One of my favorite books around this time was “The Leonardo da Vinci Sketchbook” filled with wonderful machines and ideas and detailed drawings, many of which also never saw the light of day as well. You can view all of the da Vinci notebooks online.

If I had only acted early and patented them when I should have, I could now be sitting around blogging all day long.

Do you see mere resemblance between my inventions and this Japanese Pancake Sandwich Maker?

Or take this for example, the other day I was at a Holiday INn Express and what did I find in the free breakfast area?

Yet another pancake making machine!

Luckily, I still have one “ace in the hole” idea left. The woman’s urinal wand. It is a flexible wand that can be placed in the right spot which also has a retractable plastic roll for hygienic purposes. Just think how many of these things you could fit in a single ladies room? The line for the mens room would be longer than the line for the womans room.

I could go on and on, but I wont. The only other item that deserves a small space here is Hank’s Ancho-Chilli Paste. I invented it awhile back while refining a recipe for the worlds best turkey chili and realized I had stumbled on a marketable, nothing like it in the world, culinary treat. This is the one item that I truly believe could sell and be profitable. If anyone out there wants to run with it, let me know. The only two people in the world that have the recipe are Tim Hennessy and John Lindley, so if it gets out, I know exactly where to look. 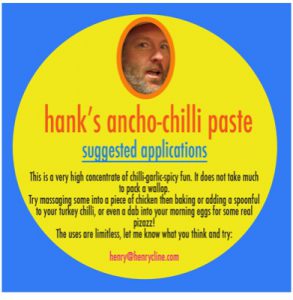 Who me? Well, Uh, I used to have a website (still do) that I love(d) and always wanted it to be pretty much a blog, even though blogs did not exist when I started the site. Like a daily newspaper of all things Hank is the way I always looked at it. So now, I crumbled and have a blog like the rest of humanity.
View all posts by admin →
This entry was posted in Historical, My life, The World Outside. Bookmark the permalink.