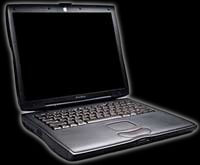 Yet I should kill thee with much cherishing.
Good night, good night! Parting is such sweet sorrow,
That I shall say good night till it be morrow.

Where shall I begin? What can one say about such a beautiful, long-lasting relationship?

A brief google search brings up such accolades as:

The Apple Powerbook G3 Firewire 2000 AKA “Pismo” was possibly the greatest computer ever brought forth from Cupertino. Announced in February 2000 at MacWorld Tokyo If Apple had stopped making computers all together at that time, it would have been all right with me, sort of.

Up until very recently I felt quite confident about my Pismo’s abilities to carry forward. There was a a certain awe inspiring cache in whipping that puppy out at a local wireless hotspot and jacking in. Was it the 14.1″ screen or the two firewire ports or the two USB ports or the S-Video input or the monitor output or the sleek design or the two module bays that afforded a dizzying array of add-ons or the built in Airport card or the two PCMCIA card slots, no it was no one thing in particular, It was all of it, and oh so much more.

I have so much love for this model I am not even sure where to start. It feels like no matter what I say I cannot convey the profound enjoyment this sweet unit has brought me. It has been my contention that up until very recently, this little sweetie could hold its own against any entry level Apple laptop. You see, I have always been a firm believer in trailing edge technology. Perhaps it is enough just to look at the the raw facts.

I buy virtually all refurbished computers at a time when they are just becoming obsolete. My current Macbook was one of the first two models offered from Apple and I snapped up that dude from Apple itself for a mere $699!, Actually I don’t think I have purchased a new, current model Apple Product since my Powerbook 180 (with trackball) for like $4000!!! but clearly I digress.

Regarding my Pismo, I made a clear decision early on to take this bundle of joy to the limit. This was accomplished by maxing the ram to 1gig, installing a reasonably (at the time) sized hard drive of 40 gigs, installing an internal Airport card and of course sending the beloved unit in for the only hardware processor upgrade I have ever felt was worth while, kickin’ it to a whopping 500 Mghz on a G4 chip. I also threw in a replacement CDRW and an after market battery that cruised along for as much as three hours.

Of course this journey was wrought with peril, the Pismo It is a very difficult laptop to disassemble, made long before the days of 30 seconds hard drive upgrades. So I learned the hard way how to: 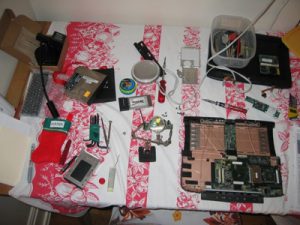 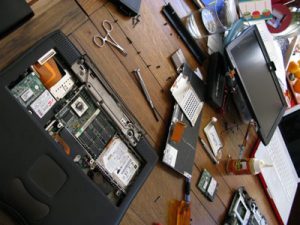 So, with all that power, the Piz was pretty much an unbeatable road warrior. It ran everything from Stickies to Photoshop with aplomb. But that is just the innards, the real reason the Pismo was such an important model is that Apple just happened to hit a such a sweet design and functionality spot. Coming out after a couple of ill fated laptop designs (remember the Lombard) the Pismo had a huge screen, an awesome port configuration was light by the days standard. 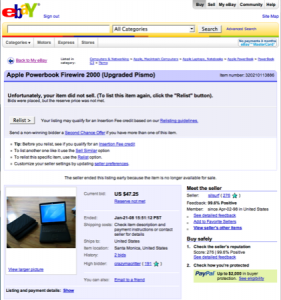 And now here I am at the end of my beloved Apple Powerbook Pismo’s life with Hank. I put the cherished one up on eBay with a reserve of $275 and within 24 hours I had someone drooling over it and requested that I delist it so he could pay me more than my reserve, what am I supposed to say. So the lucky human from Mechanicsville, PA bought my firestarter for a mere $325. The whole thing happend so quickly I don’ know what to say. One day I am replacing the trackpad and the next I am placing the Pizzerator back into it’s original shipping box and heading for the USPO. Perfect!

The time has come for her to go. I just need to pass this amazing computer onto some other lucky soul for years and years of unbeatable high octane computer enjoyment. The man from Mechanicsville says he is buying it for his daughter. Can you imagine the decades of shear lightning fast terror this pupply is destined for. I feel my baby is in good hands.
Just had to get it off my chest. 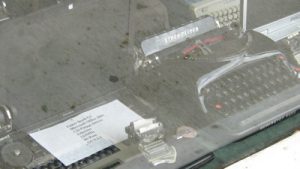 I realized while looking through some photos that truly that last hurrah of my baby was a trip I made from Wellfleet, Cape Cod, to western Massachusetts last summer. I had plenty of prime Pismo moments in the never ending stream of picture perfect organic coffee joints that dot the Berkshires. There was one particular town, Amherst I believe, that had this incredible used typewriter store. I went in and had a nice talk with the proprietor, about the novelty of using an actual ribbon typewriter and the untold merits there of. Then I asked if I could take some photos for my life file. He flatly refused, says he gets way too many people looking to just take pictures of all the old typewriters and it was not all right. OK I thought, except when I left I had one last look in the window and what I saw defied description. I had to blast off a shot and then run for the hills.

I received this note from a fine friend who has been along for the ride, had to post it:

I have just completed a full three minutes of silence, which I
believe may be close to the restart time on your Piz.

I was with you two every step of the way, watching your
relationship grow with each new install and upgrade. As God
is my witness, you did the work, you put in the time, and I watched
you both grow together.

News of your sale was met with shock
and dismay, but then, the good times are what come to mind.
“Marathon” and emerging from the darkness after two years. Only Piz took that journey with
you around each unknown alien-laden corner . Only Piz was with you when you made it
to Macworld and closed the convention center to eek out your podcast of
the day’s events.

You saw the highs, you experienced the lows, and through it all,
the love is what remains.

oh, and btw, you cannot install Leopard on a Pismo

( December 10, 2009 update: I just sold my last Pismo related item on eBay. A 12v auto apadter power plug to a gentleman in England. He sent me this email after he safely received the package)

The adapter, which looks great,  arrived speedily and safely today – remarkable. I enjoyed your website – many thanks for that also.
Attached is a photo of the boat ( a “Tumlare” – built in Gothenburg in 1936 ) on the Beaulieu River ( just upstream from Bucklers Hard ) where the adapter will spend its new life refreshing a Pismo.
Thanks again 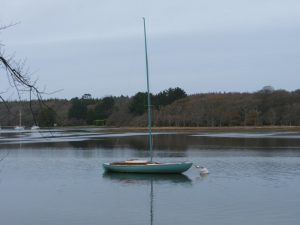 Who me? Well, Uh, I used to have a website (still do) that I love(d) and always wanted it to be pretty much a blog, even though blogs did not exist when I started the site. Like a daily newspaper of all things Hank is the way I always looked at it. So now, I crumbled and have a blog like the rest of humanity.
View all posts by admin →
This entry was posted in Computer, My life. Bookmark the permalink.